Do your friends a favor. Email this article to a future groom who just needs a little nudge in the right direction.

It only makes sense, guys.  You’ve found your soulmate—that sexy Yeti of the dating world. You’re about to get together with your closest friends and family for the holidays.  And, as soon as you recover, hearts and cupids will fill the stores and further goad you into making the most romantic gesture of your life.

You might as well bite the proverbial bullet and pop the infamous question now.

You’re in good company.  As I write this, a record 25 percent of the Savannah magazine staff is engaged.  And, according to bridal fantasy factory The Knot, the vast majority—39 percent—of marriage proposals take place between Thanksgiving and Valentine’s Day.

So you’re not alone—but are you prepared?

“I was fairly certain she would say ‘yes’ since we had discussed it before, but I wasn’t 100 percent positive.  At that moment, I don’t know that anyone could be.” 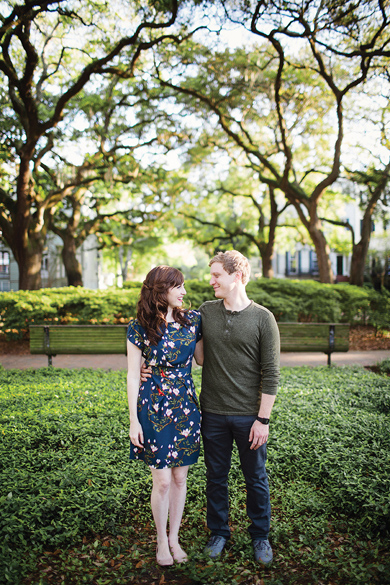 A Place for Us

Corey Zidow thought he was prepared to ask “the” question.  He’d done the research, chosen the perfect ring and planned a picturesque location.  But Savannah’s humidity had other plans.

What started as a proposal in the park took a swift detour, thanks to the rain.

Friend and photographer Izzy Hudgins was there to capture the moment, but she ended up doing double duty: keeping Corey’s intended, Courtney, occupied with “shopping” while Corey scrambled to set up a new location.

“At one point I tried to get Izzy to join me for coffee at The Coffee Fox—I almost ruined the surprise,” Courtney recalls.  Meanwhile, Corey was making that very java joint, at the corner of Broughton and Whitaker streets, his new home base.

“We once played pretend ‘bride and groom’ at The Coffee Fox for a photo shoot by Izzy, styled by Audrey Wagner King of French Knot Studios,” Courtney recalls, “So I really love that [the proposal] ended up being there.”

At the time, though, the would-be groom wasn’t so sure.

“I was fairly certain she would say ‘yes’ since we had discussed it before,” he admits, “but I wasn’t 100 percent positive.  At that moment, I don’t know that anyone could be.  I was nervous. I had the ring out of its box and in my pocket while walking to the coffee shop, and I don’t think I stopped touching it until I finally put it on Courtney’s finger.”

Izzy’s photographs speak a thousand words about the success of the proposal—and the resulting wedding will appear in our next edition of Savannah Weddings magazine—but Corey still has a word of advice to his fellow grooms: “Don’t overthink the question, but do check the weather beforehand.”

“Survey her friends, parents and siblings to find out if she has been talking about engagement rings, marriage and wedding plans.”

Of course, a successful proposal depends entirely on the tastes and preferences of the person being asked.  After all, the goal is not a grudging “yes” but a shared memory—like Corey and Courtney’s—that will last a lifetime.

The Rev. Steven Schulte has heard his share of proposal success stories—each tailored to the temperament of the beloved.

“One groom told me he proposed when they both had their hands inside of an atomic bomb they were working on,” he chuckles.  “Another groom admitted that the bride proposed.”

The stories all come down to one thing.

“Know your fiancé,” he urges.  “Does he or she like surprises?  Public scenes?  They aren’t for everyone.”

And what about too much anticipation?

“Instead of the traditional ring on Christmas Day or New Year’s, consider the days leading up to the holiday,” he urges.  “They tend to expect it on the holiday, so surprise the surprise.  And don’t walk around all day with the ring in your pocket, waiting for the right time.  Your fiancé knows you, and will notice that you’re not acting right.  Just do it.”

Photographer Kelli Boyd offers a proposal package, which has given her rare insight on the moment as it unfolds.

“Lately, I feel like proposals have taken on a whole new direction,” she observes.  “It used to be that it was a special moment shared between two people, but now it can be a full-on production with photographers, videographers, and planners to aid in how and where it all is going to take place.”

All the same, the fundamentals are more meaningful than ever.

“My favorite part of everyone’s story is how they were so nervous to ask their fiancé’s father’s permission to marry their daughter,” Kelli smiles.  “However, they all said how appreciative the fathers were that they took the time to ask.”

“How you lead up to the proposal may make it more memorable,” he advises.  “Get the parents involved.  Ask them for their advice.”

The same goes for friends.

“Maybe include them in the flashmob when you pop the question,” the reverend chuckles.

After all, your relationship may be your business, but your marriage is a social contract that gets its strength from the support of those around you.

“Don’t bring everyone in the family with you when you are choosing the ring. They aren’t likely to agree on any one style or design—and you may end up walking out with something you don’t like or can’t afford.”

One Ring to Rule Them All

Including loved ones can also help you gauge the timing and viability of your proposal, observes Jean Templett, store manager at the Levy’s Jewelry flagship on the corner of Broughton and Bull streets.

“Be certain that she is ready to be asked,” he cautions.  “Survey her friends, parents and siblings to find out if she has been talking about engagement rings, marriage and wedding plans,” he advises.  “Then, take her for a ‘test drive’ at the jewelry store to see what attracts her attention.”

At this point, you may find yourself in terra incognita.  But your life is tied to the fate of the ring—to paraphrase a certain Tolkien trilogy—so pay close attention.

“Take notes—mental or written—and remember what she points out to you,” Jean urges.

Ornate or simple?  Baroque or Deco?  Platinum or rose gold?  Princess or emerald cut?  The options are endless, so study your soulmate’s style.

And what if you want your proposal to be a surprise?

“Her friends will also know styles and diamond shapes she likes,” he advises.  “They may even know her finger size”—or be able to help you get it—“to eliminate the guesswork.”

That advice comes with a warning.

“Don’t bring everyone in the family with you when you are choosing the ring,” he cautions, from professional experience.  “Stick to one trusted friend or relative.  If you bring more than one person to the store, they aren’t likely to agree on any one style or design—and you may end up walking out with something you don’t like or can’t afford.”

Speaking of which, “As far as cost is concerned, the industry guidelines generally say three months’ salary,” Jean says.  But don’t let that discourage you.  “If that’s not a comfortable neighborhood, get something you can afford now, and upgrade the diamond later.”

You can even add value to your ring without raising the cost.

“With something this personal, custom design is often the best solution,” adds Omar Portigliatti, a master jeweler at International Diamond Center.  (Full disclosure: he moonlights as this writer’s fiancé, but he makes a good point.) “My clients are often surprised that they can have a totally original design for the same price as a ring in the case.”

You’ve got the place, the plan, the support of friends and family, and now the ring.  There’s nothing left to do but ask.  So relax…and watch the weather.  If all else fails, there’s always The Coffee Fox.

To help you plan the perfect proposal, we asked three satisfied customers what their fiancés got right.

“Sheldon asked me to marry him at a surprise engagement party he had planned.  He took the time to contact all my close friends and family, and even had some of my church members helping with the secret proposal.  He got a photographer to take pictures, so I could always look back on that day.  And he got advice from my children and mother about the ring.”

“Tim and I were neighbors.  We met in the parlor of our building and it was love at first sight, so he proposed in the very same spot where we met.  I loved that it was in this private place that would always be so special to us.

“First, he took my father to Elizabeth on 37th to ask for his blessing.  He dressed up in a seersucker suit from J. Parker and proposed with my great-grandmother’s ring, while one of his friends played the song that was on the first time we kissed.”

“Sean knew me well enough to make sure it was just the two of us—and he managed to surprise me, which isn’t easy.  Before he popped the question, he told me everything he loved about me and the reasons why he wanted to spend the rest of his life with me.  The ring was perfect and I could tell he took his time finding just the right setting and diamond to fit my personality.”

Drawing upon the natural beauty and unique charm of the Coastal Georgia and South Carolina region — Savannah, Tybee Island, Bluffton, Hilton Head Island, Beaufort, the Golden Isles, and more — Southern Coastal Weddings offers an elevated and authentic view of the region’s wedding culture … ever after, circa now.

BRIDESMAID COUTURE Moving past the era of identical bridesmaid dresses, where each attendant was a clone of the next, brides’ tastes are now trending…